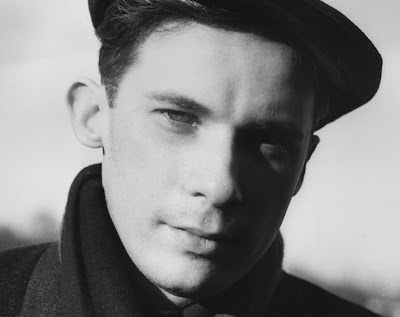 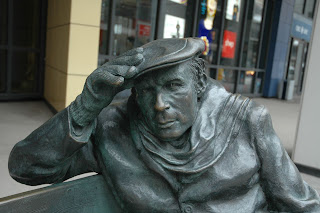 Orlando Gibbons apparently never lacked for friends in high places. No less a personage than King James I gave the composer 150 pounds stirling in recognition of his faithful musical service; at other times Gibbons' musical gifts graced the chambers of the Prince of Wales (later King Charles), the Princess Elizabeth, the Earl of Arundel, and the Earl of Somerset, for whom Gibbons composed some wedding music. Like his predecessor William Byrd, Gibbons also apparently cultivated the favors of other persons at the royal court, including three royal chaplains and the Earl of Salisbury. (One manuscript source itself perversely attests to Gibbons' widespread contacts, it being copied by an English recusant gentleman while languishing in the Fleet Street Prison.) Several manuscript collections preserve a pair of dances -- the stately Pavan and an associated Galliard -- with that gentleman's name attached, though the "Lord Salisbury" apparently received Gibbons' dances as a memorial tribute after his death.

As with the wealth of contemporary English pavans, Gibbons sets his "Lord Salisbury" Pavan in a stately duple meter, with three repeating sections. Thus, in courtly dancing circles, the dance could be appropriate to a processional entry dance. However, this particular dance displays a rich and even chromatic harmonic palette, and a third strain full of dense and more severe counterpoint, both more evocative of a funeral memorial. In addition, the first strain extends its final cadence to fill an irregular and offbeat phrase structure. English composers quite often paired a Pavan with an attendant Galliard, a second dance in more lively triple meter, though this is the only such pair surviving from Gibbons' hand. The "Lord Salisbury" Galliard shares with the first dance a severe minor mode, a harmonic language rich in color and nuance, and a texture laced with blistering ornamentation. The Galliard also shares with the Pavan a somewhat unsettling use of irregular phrase structures: its three strains oscillate between seven measures, nine measures, and finally at the close, eight measures. Romantic history might see in this piece a composer pouring out his grief in stylized musical language.

acquired January 1, 1850 - January 1, 2000 download large image (453 KB, PNG, 1440x720)
Occasionally, short-term meteorological conditions merge with ongoing human emissions to produce extreme outbreaks of air pollution. In January 2013, a blanket of industrial pollution enveloped northeastern China. In June 2013, smoke from agricultural fires in Sumatra engulfed Singapore.
In most cases, the most toxic pollution lingers for a few days or even weeks, bringing increases in respiratory and cardiac health problems at hospitals. Eventually the weather breaks, the air clears, and memories of foul air begin to fade. But that’s not to say that the health risks disappear as well. Even slightly elevated levels of air pollution can have a significant effect on human health. Over long periods and on a global scale, such impacts can add up.
But exactly how much exposure to air pollution do people around the world get? And how much health damage is it causing? Since there are gaps in networks of ground sensors, University of North Carolina earth scientist Jason West is leading an effort to answer those questions using computer models that simulate the atmosphere.
In 2010, West and colleagues published an estimate of the global health effects of air pollution based on a single atmospheric model. More recently, West and colleagues thought they could improve their calculations by using results from a range of atmospheric different models—six in all—rather than relying on just one. In 2013, they published their results in Environmental Research Letters, concluding that 2.1 million deaths occur worldwide each year as a direct result of a toxic type of outdoor air pollution known as fine particulate matter (PM2.5).
The map above shows the model estimate of the average number of deaths per 1,000 square kilometers (386 square miles) per year due to air pollution. The researchers used the difference in pollution levels between 1850 and 2000 as a measure of human-caused air pollution. Dark brown areas have more premature deaths than light brown areas. Blue areas have experienced an improvement in air quality relative to 1850 and a decline in premature deaths. Fine particulate matter takes an especially large toll in eastern China, northern India, and Europe—all areas where urbanization has added considerable quantities of PM2.5 to the atmosphere since the start of the Industrial Revolution.
A few areas—such as the southeastern United States—saw PM2.5 concentrations decline relative to pre-industrial levels (shown in blue). In the southeastern United States, the decrease in PM2.5 is likely related to a decline in local biomass burning that has occurred over the last 160 years.
Earth Observatory image by Robert Simmon based on data provided by Jason West. Caption by Adam Voiland.

Poetry: Dylan Thomas - The Force That Through The Green Fuse Drives The Flower - Especially When The October Wind - Links to more DT 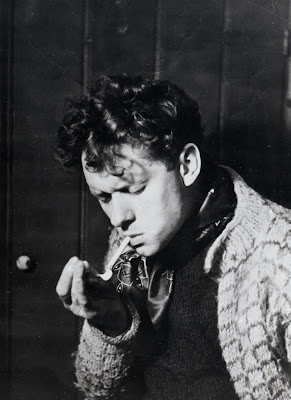 The Force That Through The Green Fuse Drives The Flower

The force that through the green fuse drives the flower
Drives my green age; that blasts the roots of trees
Is my destroyer.
And I am dumb to tell the crooked rose
My youth is bent by the same wintry fever.

The force that drives the water through the rocks
Drives my red blood; that dries the mouthing streams
Turns mine to wax.
And I am dumb to mouth unto my veins
How at the mountain spring the same mouth sucks.

The hand that whirls the water in the pool
Stirs the quicksand; that ropes the blowing wind
Hauls my shroud sail.
And I am dumb to tell the hanging man
How of my clay is made the hangman's lime.

The lips of time leech to the fountain head;
Love drips and gathers, but the fallen blood
Shall calm her sores.
And I am dumb to tell a weather's wind
How time has ticked a heaven round the stars.

And I am dumb to tell the lover's tomb
How at my sheet goes the same crooked worm. 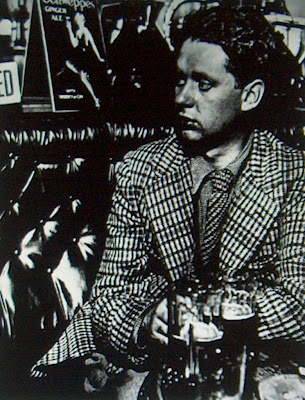 Especially When The October Wind

Especially when the October wind
With frosty fingers punishes my hair,
Caught by the crabbing sun I walk on fire
And cast a shadow crab upon the land,
By the sea's side, hearing the noise of birds,
Hearing the raven cough in winter sticks,
My busy heart who shudders as she talks
Sheds the syllabic blood and drains her words.

Behind a post of ferns the wagging clock
Tells me the hour's word, the neural meaning
Flies on the shafted disk, declaims the morning
And tells the windy weather in the cock.
Some let me make you of the meadow's signs;
The signal grass that tells me all I know
Breaks with the wormy winter through the eye.
Some let me tell you of the raven's sins.

Especially when the October wind
(Some let me make you of autumnal spells,
The spider-tongued, and the loud hill of Wales)
With fists of turnips punishes the land,
Some let me make of you the heartless words.
The heart is drained that, spelling in the scurry
Of chemic blood, warned of the coming fury.
By the sea's side hear the dark-vowelled birds. 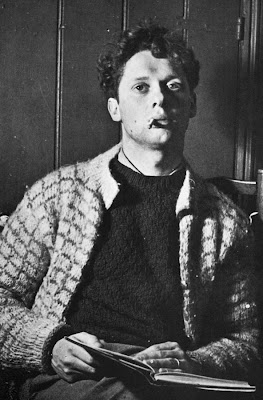 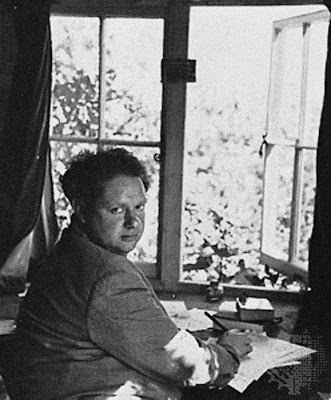 Poetry: Dylan Thomas - The Force That Through The Green Fuse Drives The Flower - Especially When The October Wind - Links to more DT

Enlaces a esta entrada Etiquetas: Poetry: Dylan Thomas - The Force That Through The Green Fuse Drives The Flower - Especially When The October Wind - Links to more DT 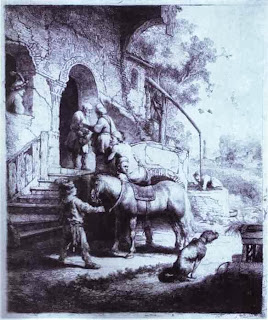 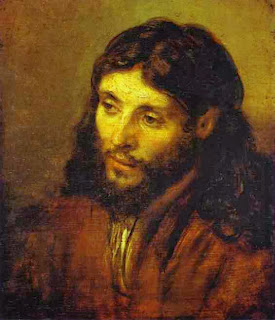 Rembrandt - The Head of Christ 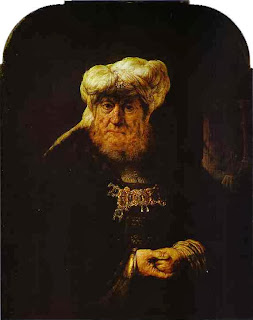 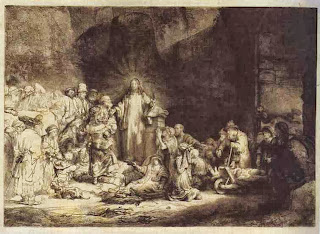 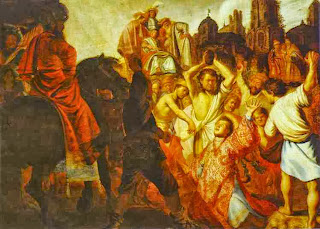 Rembrandt - The Martyrdom of St. Stephen 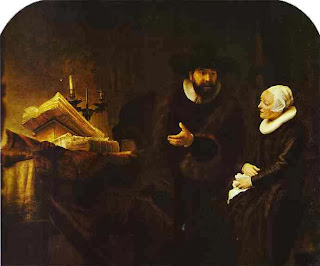 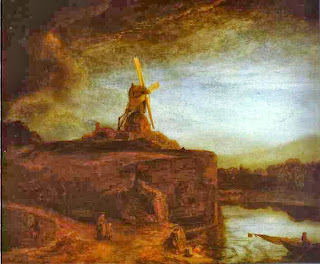 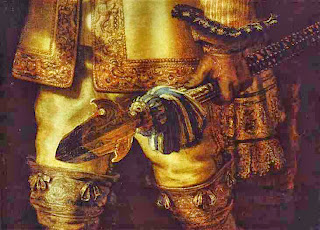 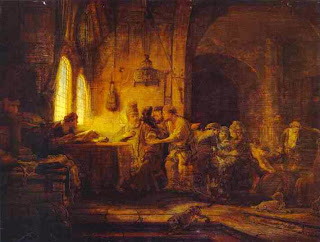 Rembrandt - The Parable of the Laborers in the Vineyard 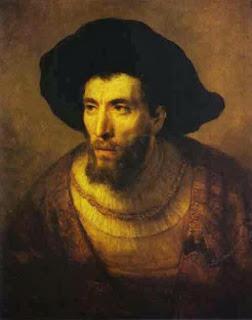 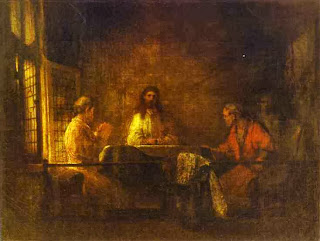 Rembrandt - The Pilgrims at Emmaus 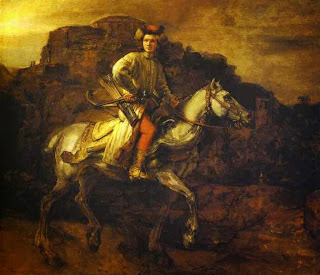 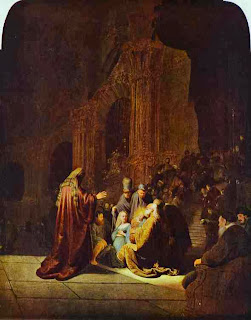 Rembrandt - The Presentation of Jesus in the Temple