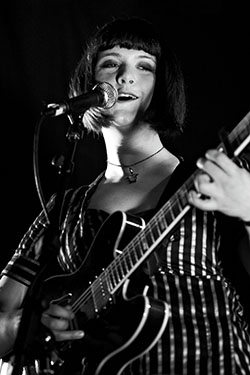 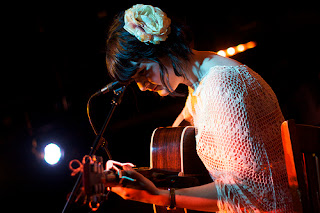 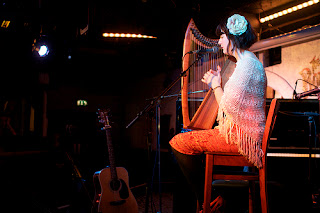 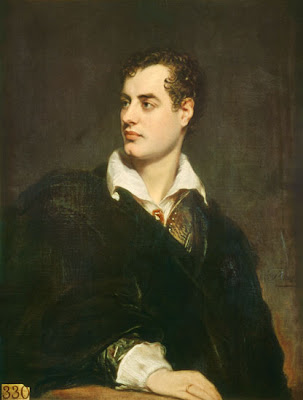 When all around grew drear and dark,
And reason half withheld her ray --
And hope but shed a dying spark
Which more misled my lonely way;

In that deep midnight of the mind,
And that infernal strife of heart,
When dreading to be deemed too kind,
The weak despair -- the cold depart;

When fortune changed -- and love fled far,
And hatred's shafts flew thick and fast,
Thou wert the solitary star
Which rose, and set not to the last.

Oh! blest be thine unbroken light!
That watch'd me as a seraph's eye,
And stood between me and the night,
For ever shining sweetly nigh.

And when the cloud upon us came,
Which strove to blacken o'er thy ray --
Then purer spread its gentle flame,
And dash'd the darkness all away.

Still may thy spirit dwell on mine,
And teach it what to brave or brook --
There's more in one soft word of thine
Than in the world's defied rebuke.

Thou stood'st, as stands a lovely tree,
That still unbroke, though gently bent,
Still waves with fond fidelity
Its boughs above a monument.

The winds might rend -- the skies might pour,
But there thou wert -- and still wouldst be
Devoted in the stormiest hour
To shed thy weeping leaves o'er me.

But thou and thine shall know no blight,
Whatever fate on me may fall;
For Heaven in sunshine will requite
The kind -- and thee the most of all.

Then let the ties of baffled love
Be broken -- thine will never break;
Thy heart can feel -- but will not move;
Thy soul, though soft, will never shake.

And these, when all was lost beside,
Were found, and still are fix'd in thee; --
And bearing still a breast so tried,
Earth is no desert -- ev'n to me.

Though the day of my destiny's over,
And the star of my fate hath declined,
Thy soft heart refused to discover
The faults which so many could find;
Though thy soul with my grief was acquainted,
It shrunk not to share it with me,
And the love which my spirit hath painted
It never hath found but in /thee./

Then when nature around me is smiling,
The last smile which answers to mine,
I do not believe it beguiling,
Because it reminds me of thine;
And when winds are at war with the ocean,
As the breasts I believed in with me,
If their billows excite an emotion,
It is that they bear me from /thee./

Though the rock of my last hope is shiver'd,
And its fragments are sunk in the wave,
Though I feel that my soul is deliver'd
To pain -- it shall not be its slave.
There is many a pang to pursue me:
They may crush, but they shall not contemn --
They may torture, but shall not subdue me --
'Tis of /thee/ that I think -- not of them.

Yet I blame not the world, nor despise it,
Nor the war of the many with one --
If my soul was not fitted to prize it,
'Twas folly not sooner to shun:
And if dearly that error hath cost me,
And more than I once could foresee,
I have found that, whatever it lost me,
It could not deprive me of /thee./

From the wreck of the past, which hath perish'd,
Thus much I at least may recall,
It hath taught me that what I most cherish'd
Deserved to be dearest of all:
In the desert a fountain is springing,
In the wide waste there still is a tree,
And a bird in the solitude singing,
Which speaks to my spirit of /thee./

My sister!  my sweet sister! if a name
Dearer and purer were, it should be thine,
Mountains and seas divide us, but I claim
No tears, but tenderness to answer mine:
Go where I will, to me thou art the same --
A loved regret which I would not resign.
There yet are two things in my destiny, --
A world to roam through, and a home with thee.

The first were nothing -- had I still the last,
It were the haven of my happiness;
But other claims and other ties thou hast,
And mine is not the wish to make them less.
A strange doom is thy father's son's, and past
Recalling, as it lies beyond redress;
Reversed for him our grandsire's fate of yore, --
He had no rest at sea, nor I on shore.

If my inheritance of storms hath been
In other elements, and on the rocks
Of perils, overlook'd or unforseen,
I have sustain'd my share of worldly shocks,
The fault was mine; nor do I seek to screen
My errors with defensive paradox;
I have been cunning in mine overthrow,
The careful pilot of my proper woe.

Mine were my faults, and mine be their reward,
My whole life was a contest, since the day
That gave me being, gave me that which marr'd
The gift, -- a fate, or will, that walk'd astray;
And I at times have found the struggle hard,
And thought of shaking off my bonds of clay:
But now I fain would for a time survive,
If but to see what next can well arrive.

Kingdoms and empires in my little day
I have outlived, and yet I am not old;
And when I look on this, the petty spray,
Of my own years of trouble, which have roll'd
Something -- I know not what -- does still uphold
A spirit of slight patience; -- not in vain,
Even for its own sake, do we purchase pain.

Perhaps the workings of defiance stir
Within me, -- or perhaps a cold despair,
Brought on when ills habitually recur, --
Perhaps a kinder clime, or purer air,
(For even to this may change of soul refer,
And with light armour we may learn to bear,)
Have taught me a strange quiet, which was not
The chief companion of a calmer lot.

I feel almost at times as I have felt
In happy childhood; trees, and flowers, and brooks,
Which do remember me of where I dwelt,
Ere my young mind was sacrificed to books,
Come as of yore upon me, and can melt
My heart with recognition of their looks;
And even at moments I could think I see
Some living thing to love -- but none like thee.

Here are the Alpine landscapes which create
A fund for contemplation; -- to admire
Is a brief feeling of a trivial date;
But something worthier do such scenes inspire.
Here to be lonely is not desolate,
For much I view which I could most desire,
And, above all, a lake I can behold
Lovelier, not dearer, than our own of old.

Oh, that thou wert but with me! -- but I grow
The fool of my own wishes, and forget
The solitude which I have vaunted so
Has lost its praise in this but one regret;
There may be others which I less may show; --
I am not of the plaintive mood, and yet
I feel an ebb in my philosophy,
And the tide rising in my alter'd eye.

I did remind thee of our own dear Lake,
By the old Hall which may be mine no more.
Leman's is fair; but think not I forsake
The sweet remembrance of a dearer shore:
Sad havoc Time must with my memory make,
Ere /that/ or /thou/ can fade these eyes before;
Though, like all things which I have loved, they are
Resign'd for ever, or divided far.

The world is all before me; I but ask
Of Nature that with which she will comply --
It is but in her summer's sun to bask,
To mingle with the quiet of her sky,
To see her gentle face without a mask,
And never gaze on it with apathy.
She was my early friend, and now shall be
My sister -- till I look again on thee.

I can reduce all feelings but this one;
And that I would not; -- for at length I see
Such scenes as those wherein my life begun.
The earliest -- even the only paths for me --
Had I but sooner learnt the crowd to shun,
I had been better now than I can be;
The passions which have torn me would have slept;
/I/ had not suffer'd, and /thou/ hadst not wept.

With false Ambition what had I to do?
Little with Love, and least of all with Fame;
And yet they came unsought, and with me grew,
And made me all which they can make -- a name.
Yet this was not the end I did pursue;
Surely I once beheld a nobler aim.
But all is over -- I am one the more
To baffled millions which have gone before.

And for the future, this world's future may
From me demand but little of my care;
I have outlived myself by many a day;
Having survived so many things that were;
My years have been no slumber, but the prey
Of ceaseless vigils; for I had the share
Of life which might have fill'd a century,
Before its fourth in time had pass'd me by.

And for the remnant which may be to come,
I am content; and for the past I feel
Not thankless, -- for within the crowded sum
Of struggles, happiness at times would steal,
And for the present, I would not benumb
My feelings further. -- Nor shall I conceal
That with all this I still can look around,
And worship Nature with a thought profound.

For thee, my own sweet sister, in thy heart
I know myself secure, as thou in mine;
We were and are -- I am, even as thou art --
Beings who ne'er each other can resign;
It is the same, together or apart,
From life's commencement to its slow decline
We are entwined -- let death come slow or fast,
The tie which bound the first, endures the last! 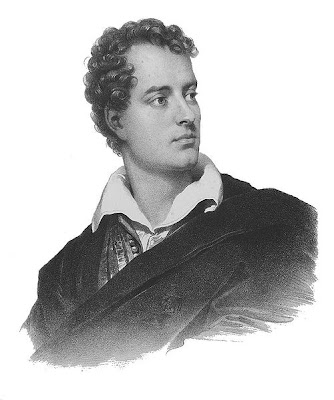