download large image (442 KB, JPEG, 1440x960)
The winter of 2012-2013 has been marked by powerful snowstorms with record-setting snowfall throughout much of the Midwestern United States. This astronaut photograph features the southern high plains of north Texas, directly south of the city of Amarillo (off the image to the north). The snowstorm that passed through this area left a record snowfall of approximately 43 centimeters (17 inches).
In this photo from the International Space Station, snow blankets the city of Canyon, Texas. Urban street grids and stream channels appear etched into the landscape by the snow, a result of both melting and street clearing in the urban regions and of the incised nature of stream channels in the surrounding plains. Agricultural fields are easily identified due to the even snow cover broken only by roadways between the fields. Palo Duro Canyon is largely free of snow along the Prairie Dog Town Fork of the Red River channel and at lower elevations, allowing the red sedimentary rocks of the canyon walls to be visible.
Lake Tanglewood, a reservoir to the northeast of Canyon appears dark due to a lack of ice cover. Another dark region to the northwest of Canyon is a feed yard for cattle; any snowfall is this area has been removed by the actions of the livestock.

Astronaut photograph ISS034-E-57550 was acquired on February 28, 2013, with a Nikon D3S digital camera using a 400 millimeter lens, and is provided by the ISS Crew Earth Observations experiment and Image Science & Analysis Laboratory, Johnson Space Center. The image was taken by the Expedition 34 crew. It has been cropped and enhanced to improve contrast, and lens artifacts have been removed. The International Space Station Program supports the laboratory as part of the ISS National Lab to help astronauts take pictures of Earth that will be of the greatest value to scientists and the public, and to make those images freely available on the Internet. Additional images taken by astronauts and cosmonauts can be viewed at the NASA/JSC Gateway to Astronaut Photography of Earth. Caption by William L. Stefanov, Jacobs/ESCG at NASA-JSC. 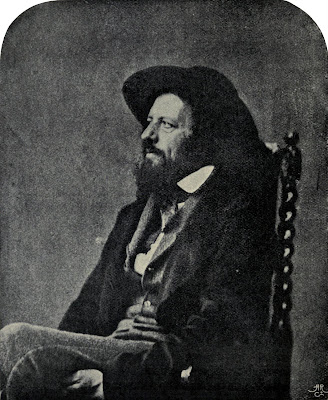 'And ask ye why these sad tears stream?'

And ask ye why these sad tears stream?
Why these wan eyes are dim with weeping?
I had a dream–a lovely dream,
Of her that in the grave is sleeping.

I saw her as ’twas yesterday,
The bloom upon her cheek still glowing;
And round her play’d a golden ray,
And on her brows were gay flowers blowing.

With angel-hand she swept a lyre,
A garland red with roses bound it;
Its strings were wreath’d with lambent fire
And amaranth was woven round it.

I saw her mid the realms of light,
In everlasting radiance gleaming;
Co-equal with the seraphs bright,
Mid thousand thousand angels beaming.

I strove to reach her, when, behold,
Those fairy forms of bliss Elysian,
And all that rich scene wrapt in gold,
Faded in air–a lovely vision!

And I awoke, but oh! to me
That waking hour was doubly weary;
And yet I could not envy thee,
Although so blest, and I so dreary.

Flow down, cold rivulet, to the sea,
Thy tribute wave deliver:
No more by thee my steps shall be,
For ever and for ever.

Flow, softly flow, by lawn and lea,
A rivulet then a river:
Nowhere by thee my steps shall be
For ever and for ever.

But here will sigh thine alder tree
And here thine aspen shiver;
And here by thee will hum the bee,
For ever and for ever.

A thousand suns will stream on thee,
A thousand moons will quiver;
But not by thee my steps shall be,
For ever and for ever.

I thought of Thee, my partner and my guide,
As being past away. -Vain sympathies!
For backward, Duddon! as I cast my eyes,
I see what was, and is, and will abide;
Still glides the Stream, and shall not cease to glide;
The Form remains, the Function never dies;
While we, the brave, the mighty, and the wise,
We Men, who in our morn of youth defied
The elements, must vanish; -be it so!
Enough, if something from our hands have power
To live, and act, and serve the future hour;
And if, as toward the silent tomb we go,
Through love, through hope, and faith's transcendent dower,
We feel that we are greater than we know. 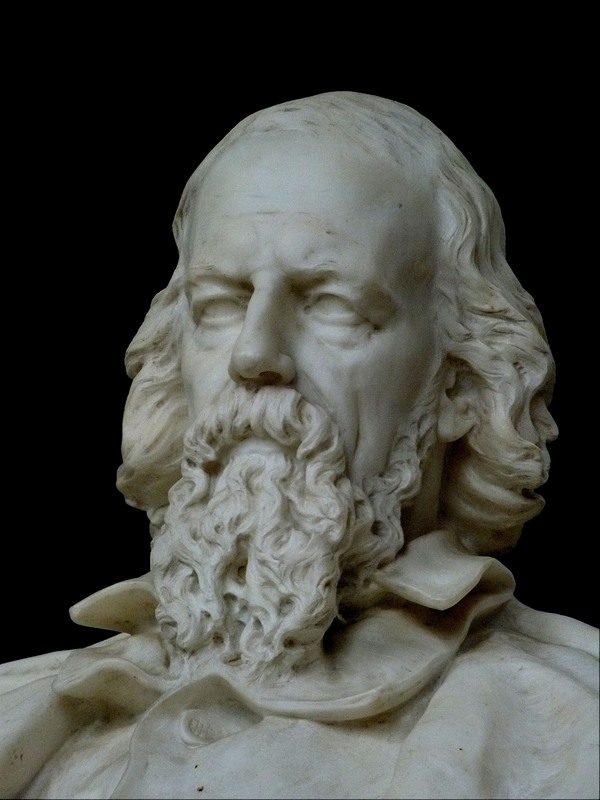 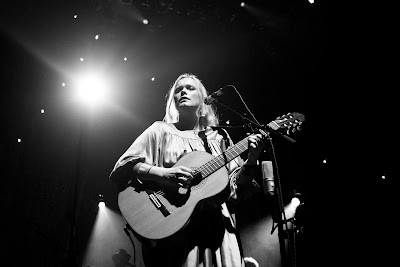 Welcome, my dear friend
I notice you are wearing your armour again
Is it the same as our last fight
Is it residue from last night

Well, I guess I have extended it
I tried to bend it a bit
There was a crack under the chest frame
And a loose screw on the left steel hand

Ane Brun (Norwegian pronunciation: [ɑnə brʉn]) (born Ane Brunvoll on 10 March 1976 in Molde, Norway) is a songwriter, guitarist and vocalist, daughter of lawyer Knut Anker Brunvoll (b. 1945) and jazz singer and pianist Inger Johanne Brunvoll (b. Kvien), and the older sister of vocalist Mari Kvien Brunvoll (b. 1984) and younger sister of photographer Bjørn Brunvoll (b. 1973).[1][2] Since 2003 she has recorded eight albums, six of which are studio albums (including a collection of duets) and one live DVD. She has lived in Stockholm, Sweden since 2001, where she writes, records and runs her own label (Balloon Ranger Recordings) when not on tour.[3]

After growing up in Molde, Norway she moved from her home town in 1995 and spent the next few years moving between Barcelona, Oslo and Bergen. In Bergen she began writing her own material while at university (jumping between courses in Spanish, law and music) as well as making a living working in record shops and bars.

After playing a few minor shows and recording her first demos in Bergen in 1999, she moved to Sweden, first to Uppsala and then to Stockholm in 2001, where she started to take her musical career seriously.

Ane recorded her debut album Spending Time with Morgan in 2002 in both Stockholm and back in Uppsala, with engineers and producers Katharina Nuttall, Cécile Grudet and Kim Nelson. It was released on the label, DetErMine, which she formed with Ellekari Larsson from Swedish band The Tiny. The debut album came out in 11 European countries in 2003 through a licence/distribution deal with V2 Music.[3]

After releasing the first album Ane toured around Europe but soon took some time out. She had been working intensively for two years and felt somewhat burnt out and in need of a break. After a six month breather she started touring around Europe again and within the next year had her second album ready. A Temporary Dive was again produced by Katharina Nuttall and was released in 2005 throughout Europe, followed by the UK and the US in 2006, and in Japan in 2007. This album took the darker themes of Spending Time With Morgan further, through songs like "The Fight Song" and title track "A Temporary Dive", but there was also space for the lighter "Song No. 6", a duet with Ron Sexsmith.

A Temporary Dive was well received all over the world, picking up good reviews in magazines and newspapers from Time Magazine to The Independent. She received award nominations from all over Europe too, and that year took home the Spellemannpris, the equivalent of the Norwegian Grammies, for Best Female Artist.[4]

After enjoying the collaboration on the previous few duets she had recorded, Ane was inspired to ask some artists whom she adored to sing with her on a full album called Duets. This album was released in November 2005 and besides another recording with Ron Sexsmith it also included songs with artists such as Syd Matters and Teitur. The collaboration with the band Madrugada on the single "Lift Me" gained her another Norwegian Grammy.[4]

Ane spent much of the next couple of years touring the world in many different stage arrangements. She has played with a full band including string section, just herself and string section at times, sometimes just a cello, perhaps with one backing vocalist – or maybe three. Of course it all started with her and the acoustic guitar, so she often ends up coming back to these solo performances too. "There is something about the focus in playing by myself that fascinates me", she says. "There’s nothing to hide behind when I’m alone on stage and it becomes almost meditative for me when I play."

One of her tours was with a string quintet, and it was recorded and released as Live in Scandinavia (2007) and featured Nina Kinert and the guitarist Staffan Johansson. The album includes songs from Ane's first two albums with new string arrangements by Malene Bay-Foged.

In 2008 she released her third studio album, Changing of the Seasons, which was produced by Valgeir Sigurðsson (Bonnie 'Prince' Billy, Múm, Coco Rosie). It included string arrangements by American composer Nico Muhly (Antony and the Johnsons, Grizzly Bear, The Reader soundtrack). Later the same year came the album Sketches which included acoustic, demo versions of the songs on Changing of the Seasons. The Sketches tour featured a stripped down, sparse sound and now touring with musicians Rebekka Karijord, Jennie Abrahamson and Linnea Olsson, there were memorable gigs in places such as the Union Chapel in London.[4]

Back on the road, a concert at the Stockholm Concert Hall was filmed and released as an album and live DVD in 2009. Late in 2009, Ane organised the No More Lullabies concert to bring attention to the issues of climate justice. She assembled 24 well-known Swedish artists such as Robyn, Loney, Dear, Titiyo and Benny Andersson of ABBA to take part in seven hours of live music and visuals to mark the International Day of Climate Action on October 24, 2009. They succeeded in drawing attention to the issue before the upcoming COP15 conference.[4]

Ane featured as one of the guests on Peter Gabriel's 2011 studio album New Blood, singing on the re-recorded version of "Don't Give Up", recorded in 2010. She was subsequently invited to perform with him as support act and back-up singer on the New Blood tour throughout 2010.

In late 2011 Ane released her sixth studio album It All Starts with One, produced by Tobias Fröberg.

From Wikipedia, the free encyclopedia
http://en.wikipedia.org/wiki/Ane_Brun

Gillian played me a song,
It was that day when everything was wrong.
Gillian singing in my heart, in my ears
And tears running down.
I was facing the ground.

Gillian played me a song,
I was so tired, then the music caressed my skin,
Like when someone finally holds you,
And you can give in. This you've been avoiding.
You think you'll fall hard,
But it's just that new start.

She sang about Elvis, she sang about time.
Gillian sang about Miss Ohio
And the last remaining song.
I stretch my rigid fingers, I clear my throat
This will be all over soon.

Now this is long ago,
I listen to her and I go back
To that day, that month, that year,
That day will never leave my mind
Gillian played me a song.

Gillian played me a song,
It was that day when everything was wrong.
Gillian singing in my heart, in my ears
And tears running down.
I was facing the ground. 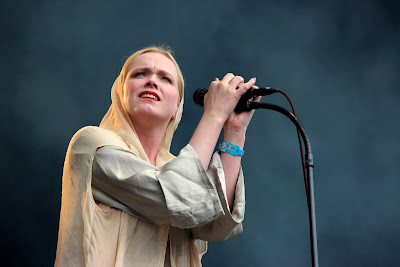