acquired July 12, 2013 download large image (9 MB, JPEG, 7400x9600)
The Moderate Resolution Imaging Spectroradiometer (MODIS) on NASA’s Aqua satellite acquired this image of Typhoon Soulik on July 12, 2013. The storm is moving west across the Pacific Ocean on course to strike Taiwan and China in the next couple of days.
At the time the image was taken, the storm had winds of 170 kilometers per hour (90 knots or 100 miles per hour), down from its maximum strength of 230 km/hr (125 knots or 140 miles per hour) on July 10. Though Typhoon Soulik weakened significantly as it moved westward toward Taiwan, it could still cause floods, landslides, and wind damage. Taiwan’s Central Weather Bureau warned residents to brace for extremely heavy rain.
Taipei is directly in the storm’s forecasted path, and will likely be impacted on Saturday, July 13. The storm is forecast to move over eastern China on Sunday and Monday.
NASA image courtesy Jeff Schmaltz, LANCE/EOSDIS MODIS Rapid Response Team at NASA GSFC. Caption by Holli Riebeek. 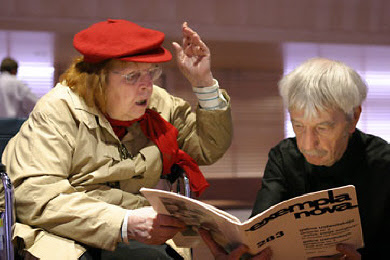 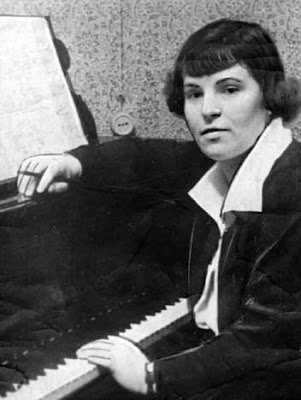 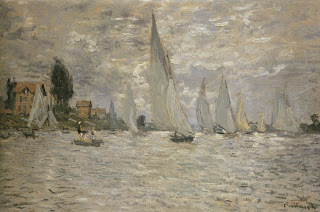 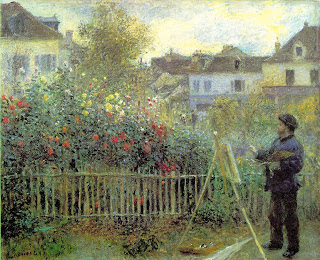 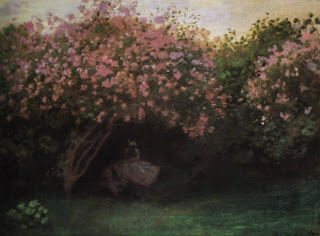 Claude Monet - Rest Under The Liliacs 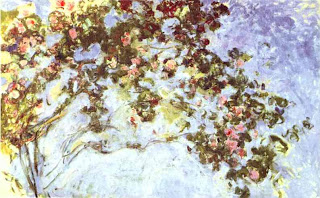 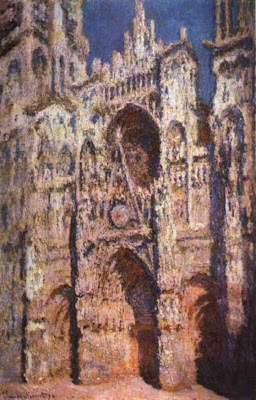 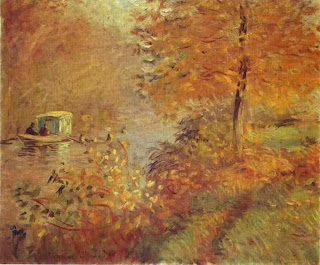 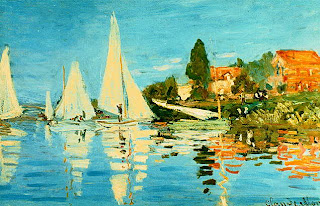 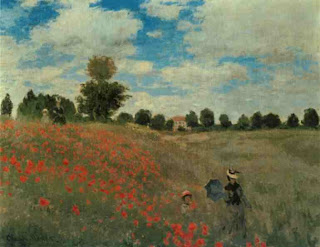 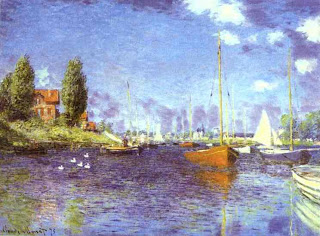 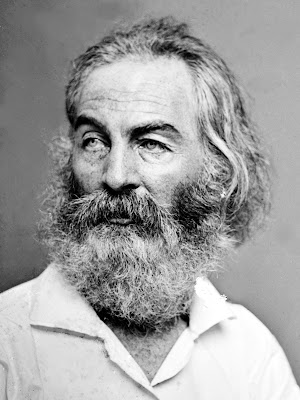 A March In The Ranks hard-prest

A march in the ranks hard-prest, and the road unknown;
A route through a heavy wood, with muffled steps in the darkness;
Our army foil'd with loss severe, and the sullen remnant retreating;
Till after midnight glimmer upon us, the lights of a dim-lighted
building;
We come to an open space in the woods, and halt by the dim-lighted
building;
'Tis a large old church at the crossing roads--'tis now an impromptu
hospital;
--Entering but for a minute, I see a sight beyond all the pictures
and poems ever made:
Shadows of deepest, deepest black, just lit by moving candles and
lamps,
And by one great pitchy torch, stationary, with wild red flame, and
clouds of smoke;
By these, crowds, groups of forms, vaguely I see, on the floor, some
in the pews laid down; 10
At my feet more distinctly, a soldier, a mere lad, in danger of
bleeding to death, (he is shot in the abdomen;)
I staunch the blood temporarily, (the youngster's face is white as a
lily;)
Then before I depart I sweep my eyes o'er the scene, fain to absorb
it all;
Faces, varieties, postures beyond description, most in obscurity,
some of them dead;
Surgeons operating, attendants holding lights, the smell of ether,
the odor of blood;
The crowd, O the crowd of the bloody forms of soldiers--the yard
outside also fill'd;
Some on the bare ground, some on planks or stretchers, some in the
death-spasm sweating;
An occasional scream or cry, the doctor's shouted orders or calls;
The glisten of the little steel instruments catching the glint of the
torches;
These I resume as I chant--I see again the forms, I smell the
odor; 20
Then hear outside the orders given, Fall in, my men, Fall in;
But first I bend to the dying lad--his eyes open--a half-smile gives
he me;
Then the eyes close, calmly close, and I speed forth to the darkness,
Resuming, marching, ever in darkness marching, on in the ranks,
The unknown road still marching.

A noiseless, patient spider,
I mark’d, where, on a little promontory, it stood, isolated;
Mark’d how, to explore the vacant, vast surrounding,
It launch’d forth filament, filament, filament, out of itself;
Ever unreeling them—ever tirelessly speeding them.

And you, O my Soul, where you stand,
Surrounded, surrounded, in measureless oceans of space,
Ceaselessly musing, venturing, throwing,—seeking the spheres, to connect them;
Till the bridge you will need, be form’d—till the ductile anchor hold;
Till the gossamer thread you fling, catch somewhere, O my Soul.

Two boats with nets lying off the sea-beach, quite still,
Ten fishermen waiting--they discover a thick school of mossbonkers--
they drop the join'd seine-ends in the water,
The boats separate and row off, each on its rounding course to the
beach, enclosing the mossbonkers,
The net is drawn in by a windlass by those who stop ashore,
Some of the fishermen lounge in their boats, others stand ankle-deep
in the water, pois'd on strong legs,
The boats partly drawn up, the water slapping against them,
Strew'd on the sand in heaps and windrows, well out from the water,
the green-back'd spotted mossbonkers. 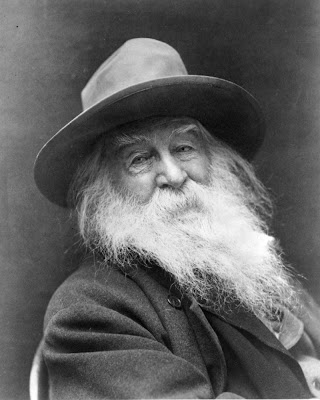 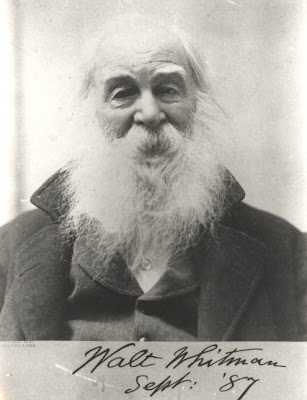 acquired June 21, 2013 download large image (4 MB, JPEG, 3309x2204)
acquired June 21, 2013 download GeoTIFF file (10 MB, TIFF)
acquired June 21, 2013 download Google Earth file (KML)
Springtime introduces a new palette to the icy, white landscape of Greenland. Pools of blue water begin to dot the surface of the ice sheet as the top layer of snow and ice melts. The ponds provide an important indicator of how much the ice sheet is melting in a given year.
In 2013, melt ponds were initially slow to appear along the edge of the ice. The first pools were visible in Landsat 8 images in early June, says Mahsa Moussavi, a Ph.D. student at the University of Colorado who is monitoring the ponds. Meltwater accumulates as pools in depressions in the ice, and the extent and depth of these ponds and the rate at which they grow and shrink tells scientists how quickly the ice is melting. Despite the late start, melting in 2013 has been rapid, occurring at a faster pace than the 1981-2010 average.
By the time the Operational Land Imager on Landsat 8 acquired this image of southwest Greenland on June 21, melting was well under way. The satellite is likely to become a critical tool for assessing ice sheet melting because it can measure light in two narrow wavelength bands–deep blue and blue (0.43–0.45 micrometers). These wavelengths of visible light penetrate pure water more deeply than others, and they also reflect off of the lakebed. Landsat observations of reflected blue light allow scientists to estimate the extent and depth of melt pond, as well as the purity of the water. These measurements can be calibrated and verified using in situ measurements, airborne lidar, or other bathymetry data.
Not only are melt ponds indicators of melt, but they also hint at how fast glaciers will shed ice into the sea. Melt ponds drain to the base of the ice sheet through crevasses. Flowing between the ice and the underlying bedrock, the water lubricates the bottom of the glacier, allowing it to flow more smoothly over the land surface and to shed ice more quickly at the coasts.
Melting also darkens the ice sheet surface. Fresh snow is bright white; when it melts, older and darker ice is exposed. Old ice can be as much as 30 percent less reflective than the younger, brighter snow. The darker old ice absorbs more energy, which leads to more melting and further darkening of the glacial surface.
The peak of the summer melt has yet to occur, says Moussavi, so it’s hard to tell how 2013 will shape up. 2012 brought extreme melting that is unmatched so far in 2013.
NASA Earth Observatory image by Jesse Allen and Robert Simmon, using Landsat 8 data from the U.S. Geological Survey. Caption by Holli Riebeek.