Poetry Tu Fu or Du Fu - Alone. Looking for Blossoms Along the River - Ballad of the Army Carts - Ballad Of The Old Cypress - Bio data 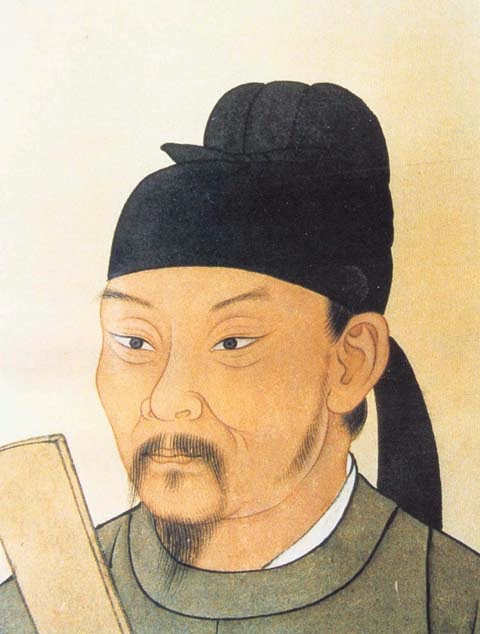 Alone, Looking for Blossoms Along the River

The sorrow of riverside blossoms inexplicable,
And nowhere to complain -- I've gone half crazy.
I look up our southern neighbor. But my friend in wine
Gone ten days drinking. I find only an empty bed.

A thick frenzy of blossoms shrouding the riverside,
I stroll, listing dangerously, in full fear of spring.
Poems, wine -- even this profusely driven, I endure.
Arrangements for this old, white-haired man can wait.

A deep river, two or three houses in bamboo quiet,
And such goings on: red blossoms glaring with white!
Among spring's vociferous glories, I too have my place:
With a lovely wine, bidding life's affairs bon voyage.

Looking east to Shao, its smoke filled with blossoms,
I admire that stately Po-hua wineshop even more.
To empty golden wine cups, calling such beautiful
Dancing girls to embroidered mats -- who could bear it?

East of the river, before Abbot Huang's grave,
Spring is a frail splendor among gentle breezes.
In this crush of peach blossoms opening ownerless,
Shall I treasure light reds, or treasure them dark?

At Madame Huang's house, blossoms fill the paths:
Thousands, tens of thousands haul the branches down.
And butterflies linger playfully -- an unbroken
Dance floating to songs orioles sing at their ease.

I don't so love blossoms I want to die. I'm afraid,
Once they are gone, of old age still more impetuous.
And they scatter gladly, by the branchful. Let's talk
Things over, little buds ---open delicately, sparingly.


Ballad of the Army Carts

The carts squeak and trundle, the horses whinny, the conscripts go by, each with a bow and arrows at his waist. Their fathers, mothers, wives, and children run along beside them to see them off. The Hsien-yang Bridge cannot be seen for dust. They pluck at the men's clothes, stamp their feet, or stand in the way weeping. The sound of their weeping seems to mount up to the blue sky above. A passer-by questions the conscripts, and the conscripts reply:
``They're always mobilizing now! There are some of us who went north at fifteen to garrison the River and who are still, at forty, being sent to the Military Settlements in the west. When we left as lads, the village headman had to tie our head-cloths for us. We came back white-haired, but still we have to go back for frontier duty! On those frontier posts enough blood has flowed to fill the sea; but the Martial Emperor's dreams of expansion remain unsatisfied.
Haven't you heard, sir, in our land of Han, throughout the two hundred prefectures east of the mountains briers and brambles are growing in thousands of little hamlets; and though many a sturdy wife turns her own hand at the hoeing and ploughing, the crops grow just anywhere, and you can't see where one field ends and the next begins? And it's even worse for the men from Ch'in.
Because they make such good fighters, they are driven about this way and that like so many dogs or chickens.
``Though you are good enough to ask us, sir, it's not for the likes of
us to complain. But take this winter, now. The Kuan-hsi troops are not being demobilized. The District Officers press for the land-tax, but where is it to come from? I really believe it's a misfortune to have sons. It's actually better to have a daughter. If you have a daughter, you can at least marry her off to one of the neighbors; but a son is born only to end up lying in the grass somewhere, dead and unburied. Why look, sir, on the shores of the Kokonor the bleached bones have lain for many a long year, but no one has ever gathered them up. The new ghosts complain and the old ghosts weep, and under the grey and dripping sky the air is full of their baleful twitterings.''

Ballad Of The Old Cypress

In front of the temple of Chu-ko Liang there is an old cypress. Its branches are like green bronze; its roots like rocks; around its great girth of forty spans its rimy bark withstands the washing of the rain. Its jet-colored top rises two thousand feet to greet the sky. Prince and statesman have long since paid their debt to time; but the tree continues to be cherished among men. When the clouds come, continuous vapors link it with the mists of the long Wu Gorge; and when the moon appears, the cypress tree shares the chill of the
Snowy Mountains' whiteness.
I remember a year or so ago, where the road wound east round my Brocade River pavilion, the First Ruler and Chu-ko Liang shared the same shrine. There, too, were towering cypresses, on the ancient plain outside the city. The paint-work of the temple's dark interior gleamed dully through derelict doors and windows. But this cypress here, though it holds its ground well, clinging with wide-encompassing, snake-like hold, yet, because of its lonely height rising into the gloom of the sky, meets much of the wind's fierce blast. Nothing but the power of Divine Providence could have kept it standing for so long; its straightness must be the work of the Creator himself! If a great hall had collapsed and beams for it were needed, ten thousand oxen might turn their heads inquiringly to look at such a mountain of a load. But it is already marvel enough to astonish the world, without any need to undergo a craftsman's embellishing. It has never refused the axe: there is simply no one who could carry it away if it were felled. Its bitter heart has not escaped the ants; but there are always phoenixes roosting in its scented leaves. Men of ambition, and you who dwell unseen, do not cry out in despair! From of old the really great has never been found a use for.

In front of K'ung-ming Shrine
stands an old cypress,
With branches like green bronze
and roots like granite;

Its hoary bark, far round,
glistens with raindrops,
And blueblack hues, high up,
blend in with Heaven's:
Long ago Statesman, King
kept Time's appointment,
But still this standing tree has men's devotion;

United with the mists
of ghostly gorges,
Through which the moon brings cold
from snowy mountains.

On civil, ancient plains
with stately cypress:
The paint there now is dim,
windows shutterless. . .)

When its hold is the strength
of Divine Wisdom
And straightness by the work of the Creator. . .

Yet if a crumbling Hall
needed a rooftree, Yoked herds would, turning heads,
balk at this mountain:

By art still unexposed all have admired it;
But axe though not refused,
who could transport it?

How can its bitter core deny ants lodging,
All the while scented boughs
give Phoenix housing?

Du Fu (Wade–Giles: Tu Fu; Chinese: 杜甫; pinyin: Dù Fǔ; 712 – 770) was a prominent Chinese poet of the Tang dynasty. Along with Li Bai (Li Po), he is frequently called the greatest of the Chinese poets.[1] His greatest ambition was to serve his country as a successful civil servant, but he proved unable to make the necessary accommodations. His life, like the whole country, was devastated by the An Lushan Rebellion of 755, and his last 15 years were a time of almost constant unrest.

Although initially he was little-known to other writers, his works came to be hugely influential in both Chinese and Japanese literary culture. Of his poetic writing, nearly fifteen hundred poems have been preserved over the ages.[1] He has been called the "Poet-Historian" and the "Poet-Sage" by Chinese critics, while the range of his work has allowed him to be introduced to Western readers as "the Chinese Virgil, Horace, Ovid, Shakespeare, Milton, Burns, Wordsworth, Béranger, Hugo or Baudelaire".[2]


Poetry Tu Fu or Du Fu - Alone. Looking for Blossoms Along the River - Ballad of the Army Carts - Ballad Of The Old Cypress - Bio data

Current blogs of The Solitary Dog:

Etiquetas: Poetry Tu Fu or Du Fu - Alone. Looking for Blossoms Along the River - Ballad of the Army Carts - Ballad Of The Old Cypress - Bio data